The image above is a simple representation of the ‘true and absolute’ technical convergence that Cisco’s Unified Computing System (UCS) introduced in 2009.  This led to some considerations regarding roles and demarcations between subject-matter expertise (SME) within ICT Departments/Organisations.

Consolidation, rationalisation, convergence.. whatever apt/buzz word you want to use, ICT has continuously made use of this general concept to move things forward and be more efficient.  From Cisco’ s Architecture for Voice, Video and Integrated Data (AVVID) way back when to LAN and SAN convergence underpinned by the innovation around Data Center Bridging (DCB) and to a certain extent IP-based storage protocol evolution, there are benefits to customers and vendors when moving forward using this general construct.  Vendors can focus their R’n’D, engineering and support efforts on what matters (and also monetise innovation), customers and providers can ‘do more with less’ and more-easily adapt to the ever changing nature of their business or sector.

A couple of general technical themes that slim technology down are  1) Modularisation (inc. ‘re-use’)  and  2) Taking an [often physical] element and emulating it in a new logical form, whether that be abstracted over a [new?] common foundation or by merging two elements using the ‘pros’ of both/all existing paradigms and [hopefully] dropping the things that aren’t so good.

Other than the maturing of these technical shifts, humans are without doubt the main hurdle to deal with.  If we take Voice, Video and Data convergence in the ‘noughties’ we were taking very distinct areas and bringing them together with one area appearing more influential; a case of adapt or risk becoming irrelevant -> individuals with positive and/or negative intent went against the grain…  Back in the DC, UCS didn’t necessitate anything quite as a drastic as that but there is/was potentially at least some blurring of the lines.

One point of control, three areas of expertise… you choose the demarcation lines between humans (if any):

In addition to some obvious reasons for the lack of a need for severe changes around the alignment + skills of people when adopting UCS, there was also a shift in how we interfaced with the infrastructure… and that’s really the crux of this post and what will make new systems and market shifts easier and easier to adopt…

UCS introduced a clear single point of control with an associated API for Compute, LAN (Access) and SAN (Edge/Initiator).  Other than the obvious uses of this API; Unified Computing System Manager itself (i.e. the tabs above) and other mainstream software packages with wider remit, we have seen ‘raw’ applications of the native HTTP-based interface and also some adoption of a Microsoft PowerShell option that wraps common API calls into “cmdlets”.

One of the notable differences between convergence today and the convergence of the past is an ‘alleviation’ offered by programmability and standardised scripting + automation.  Taking a broader look at expertise areas, there has been a ‘meet in the middle’ occurring between Infrastructure teams and Programming & Development teams (i.e. not only within the infrastructure bit).  This effort to meet in the middle encompasses some skills development focused on common and universal ways for people from different ‘infrastructure’ SME backgrounds to be more similar to each other than in the past.

i.e. Less of this 😉 (image courtesy of a very talented colleague…):

Ok ok I get it!… an example please?

Let’s take the creation of a UCS Service Profile.  I’m a Network SME… I might create these items so that they can be used within one or many Service Profiles:

I’m a Compute SME… I will make use of the items created by the Network SME (and others from a Storage SME) and add to them to complete a Service Profile (or SP Template):

However, if both SMEs wished to interface using the UCS HTTP-based API they could adopt an approach using Microsoft PowerShell (aka “UCS PowerTools” in this case).  Here’s a subset of configuration from each of the lists above: 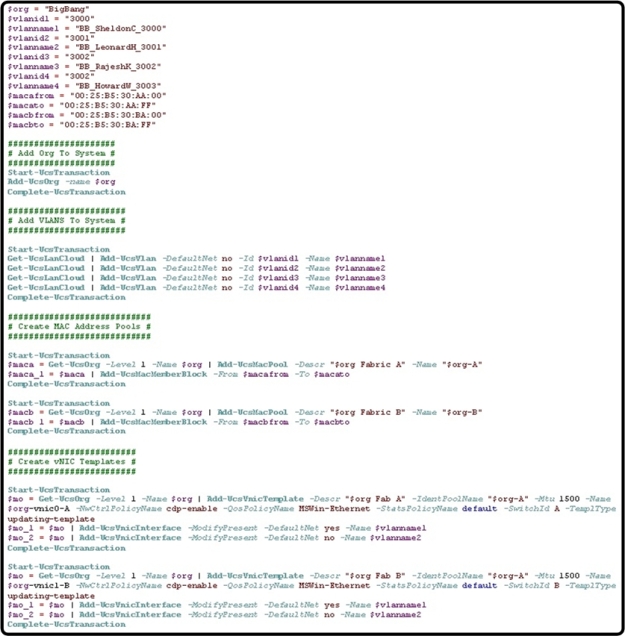 It all looks pretty consistent to all people involved now doesn’t it?  Static text mixed with variables for the bits that we want to define… all ‘translatable’ if read through to most involved.  The same would apply if we used XML/JSON and a REST/SOAP mechanism instead… which I will detail further in my next post (a bit too much for this one).  These common and universal ways of interfacing with the system(s) can often make it easier for people of different backgrounds to interpret what other SMEs are having to consider and therefore configure.  The view is of the ‘basic requests’ and not of the complexity associated with the old/existing views into technology silos… inc. GUIs and the frightening introductory view that they give!

The year is 2003 and “the boy” is handed his first view of console access to a Cisco switch by a chap going by the name of Mr Ken Worthy.  He gets shown a basic configuration and then a mission starts, a mission to know every little detail about that and every switch and router that they have along with their capabilities, to nail-down the perfect configurations for the particular organisation that he works for and to make the process of adds, moves and changes as optimised and ‘catalogued’ as possible (some network monitoring sensors were disabled in the making of…!).

The need for one such optimisation arises because he is fed up of being pestered to move interface configuration lines from one port on a switch to another port on another switch when he has more pressing and pro-active work to do; there’s a team dedicated to moving IT equipment between desks/buildings and the network changes are the only bit of the process when they need to involve someone else.  He starts by defining some smart port macros for different types of endpoints and pushes them out to every switch.  These macros have variables in them, most notably for the VLAN(s) and L2 security toolkit options that should be configured – different endpoints, for many reasons, sit in different segments.  This makes the process a little faster and standardised but the network team are still involved in this routine and basic task.  He then works with a developer in the IT team to write a web-based application (after evaluating the market for such a tool… that of course would have to be zero or next to zero cost…).  This application will give the ‘move team’ their own means of doing the same task, notably without involving said “boy” or his colleagues.  The app user selects switches + pre-authorised port numbers and the app accesses those switches, defaults the port configurations, and then lastly, it applies a macro with the relevant variables defined.  With the advent of app/server virtualisation and shared services initiatives the same app becomes more relevant to work in the DCs.

What he didn’t appreciate at the time was that he and his colleagues’ were performing a 5* example of what was wrong with the provisioning and changing of ICT services.  Work-day time, personal time, overtime; time and money put into customising-against and optimising a very basic process that could even have been done before by someone else or be a standard need everywhere.  He also later found out, while blogging at http://rbcciequest.wordpress.com, that one of the config lines in one the macro was incorrect.  How?!  He knew the switches and their options inside out, he’d tested it, he’d asked an expert… human error was obviously still a possibility, and now it was being repeated within a non-standard app.  There are many other stories to tell, especially when looking at the to-ing and fro-ing in the DC in the aftermath of this time!

The business’ simple requirement was to move staff, an app had been built, the app had a requirement of the network, the requirement was for the app itself to trigger configuration changes across the network by accessing multiple touch points and then dropping a static script written in a network-device specific language (CLI), replacing variables point-in-time.  It was all too complicated and specific.  Yet, it was still beneficial and worthwhile.

It’s now 2014, the apps are more complicated and demanding, the criticality of ICT to core business is on a different level compared to then, uptime is vital and there are often much bigger inefficiencies as the one described above.  Data Centres are at
the core of ICT services and ICT is an enabler (and disabler!) of business
more than ever before.  We’ve got a lot to look forward to, much non-trivial learning has been brought with us from the past, the top-down push of cloud consumption models are displayed in the innovation and [application programming] interfaces that are here today.  This blog is about looking at this new wave of service consumption models, technologies and dedicated solutions.  Let’s cross the chasm and destroy the hyperbole!

FYI The next couple of posts will be hold a theme of ‘Real-world programmability across the DC stack’.  They also won’t be written in the 3rd person!

Snapshots of Relevance by Richard Bannister is licensed under a Creative Commons Attribution-NonCommercial-ShareAlike 4.0 International License.
Permissions beyond the scope of this license may be available at http://snapshotsofrelevance.com.
snapshotsofrelevance.com is an independent personal weblog and web site of Richard Bannister. The opinions expressed are entirely the author’s opinions and not those of his employer and/or its affiliates. No warranty whatsoever is made that posts are accurate. There is also no assurance (apart from the author’s professional integrity) that any statement contained in a post is true, correct or precise. All brand and company names are used for identification purposes only.
Loading Comments...